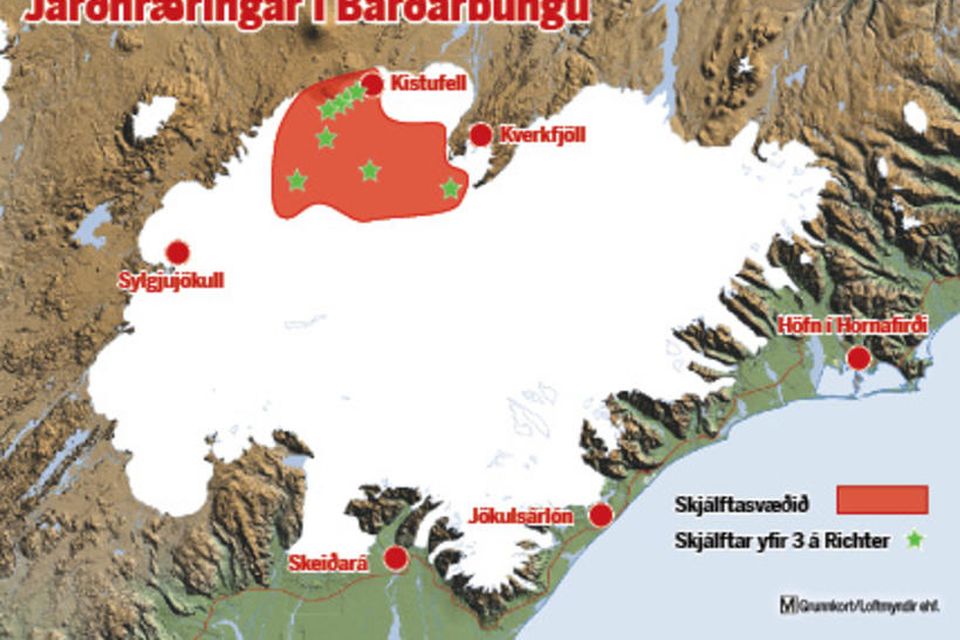 Mynd 1 af 4 The orange area has been affected by seismic activity.
Mynd 2 af 4 Satellite image of Iceland. Bárðarbunga is a part of Vatnajökull, the large glacier in the Southeast part of Iceland, and the largest one in Europe. Photo/Landmælingar Íslands
Mynd 3 af 4 Bárðarbunga. Photo/Ómar Ragnarsson
Mynd 4 af 4 Seismic activity in and around Bárðarbunga. Graph/Icelandic Met Office 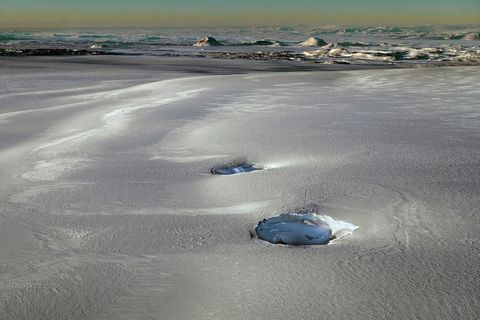 END_OF_DOCUMENT_TOKEN_TO_BE_REPLACED

A powerful volcano, Bárðarbunga, might erupt in the Highlands of Iceland. The Icelandic Met Office has upgraded its aviation alert status to orange, meaning that a "volcano shows heightened or escalating unrest with increased potential of eruption." Seismic activity is often the precursor of an eruption.

The orange alert is the second highest alert status. The next alert level, red, means that an eruption is either imminent or in progress. Bárðarbunga last erupted in 1910, but a nearby volcano erupted in 1996.

According to the website of the Icelandic Met Office: "the intense seismic activity that started on 16th of August at Bárðarbunga persists. Very strong indications of ongoing magma movement, in connection with dyke intrusion, is corroborated by GPS measurements. There are currently two swarms: one to the E of Bárðarbunga caldera and one at the edge of Dyngjujökull just E of Kistufell. At 2.37 am on the 18th a strong earthquake (M4) was located in the Kistufell swarm.

This is the strongest earthquake measured in the region since 1996. As evidence of magma movement shallower than 10 km implies increased potential of a volcanic eruption, the Bárðarbunga aviation color code has been changed to orange. Presently there are no signs of eruption, but it cannot be [ruled out] that the current activity will result in an explosive subglacial eruption, leading to an outburst flood (jökulhlaup) and ash emission. The situation is monitored closely."

Roads closed north of the volcano

Certain roads in the highland north of Vatnajökull glacier, where Bárðarbunga is situated, have been closed due to risk to tourists in the area, including the road to Herðubreiðarlindir to Askja (F88) and Gæsavatnaleið route from Sprengisandur to Askja (F910). Travellers are advised to gather information on road-safety in the area close to Bárðarbunga. This information can be found here.

We will bring you updates as the story develops.